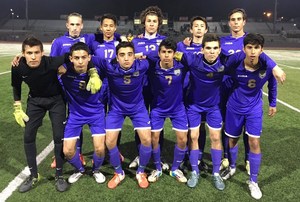 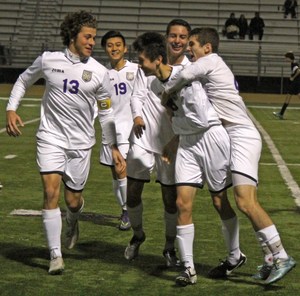 The battle between the only two unbeaten boys soccer teams left in the Palomares League was a dog fight, with the teams receiving a combined five yellow cards and one red card.

However, it was a goal by Mohamad Abboushi in the 71st minute off a free kick that gave Diamond Bar High a 2-1 victory over Claremont on Thursday and first place in the league.

Both teams received yellow cards when multiple fights broke out in the battle for sole possession of the league lead. Diamond Bar’s Tony di Donato had the only red card of the game, which came after the longest brawl. But less than a minute later, Abboushi scored the game-winning goal for the Brahmas (11-1-6, 3-0).

Diamond Bar had the vast majority of the scoring opportunities in the second half, but Nathan Armas had six saves for Claremont (10-4-1, 2-1). Twice, when free kicks were sent into the box, Armas was the first to take the ball out of the air. Then Armas saved a shot off a free kick from just outside the box.

However, on the next free kick, there was nothing Armas could do as Abboushi curved his shot just inside the near post at the top of the net to give Diamond Bar the lead.

Claremont had a couple chances to even the score, none better than on a pass into the box that Jack Kolodge headed straight towards the goal with the goalkeeper out of position. However, senior defender Justin Kim was in the perfect spot to block the shot and clear it out with a header.

With the win, Diamond Bar is alone in first place. It will get to host Claremont the next time the two squads face off in February.

Senior defender Connor Donohue scored the first goal of the night for the Brahmas. Bryan Becerra had a chance to take a shot from the right side of the box, but when a pair of Wolfpack defenders collapsed on him, he dished the ball out to Donohue, who shot right away for a goal in the 28th minute.

Claremont needed just three minutes to answer with a goal by Haider Alkhafaji, who took a throw-in directed to the box and headed it straight back over the goalkeeper to tie the game at 1-1.

Diamond Bar put four shots on goal in the first 20 minutes of the second half, including two following a pair of corner kicks, but each time the Claremont defense got the stop.

Claremont had the best opportunity to break the 1-1 tie when a perfect pass set up Patrick Luevano, who was wide-open inside the box with only the goalkeeper to beat. His shot towards the far post got past the diving goalkeeper, but it clanked off the post and Diamond Bar was the first to get to the ball.