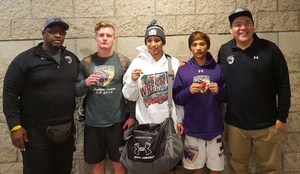 Diamond Bar High School’s boys wrestling team has pinned down some success, as three Brahmas have earned a chance  to compete in this year’s CIF Masters competition. Junior Michael Cardiel and seniors Leighlan Corpus and Ian Campbell qualified after they defeated various opponents at the CIF individuals.

On Feb. 19 and 20 at Citrus Hill High School, the Brahmas competed in the CIF Individuals competition and wrestlers Corpus, Cardiel, and Campbell finished in second, fourth, and sixth, respectively, in their weight classes.

The Brahmas will represent DBHS at the Masters Competition at the Citizens Bank Arena in Ontario February 26 and 27. Only 32 wrestlers from each weight class, among over 400 schools, will compete in the Masters Tournament, and from those wrestlers, only nine will advance to  the State Competition.

“The three that made it to Masters are working hard to reach their goal of getting to state, which is no easy task. Even getting to Masters is a great achievement that very few wrestlers get to experience,” head coach Marcus Johnson said.

While many injuries occurred that resulted in a tough season, Johnson said  that he looks forward to next  season because many wrestlers are underclassmen. Because of that, he expects wrestling to improve as a team next school year.