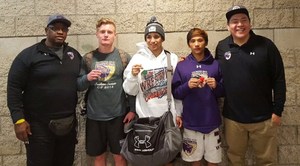 February 26 and 27, the wrestling season came to a close after three of our wrestlers competed at CIF Masters, located at the Ontario Citizens Bank Arena, and were unable to advance. To qualify to wrestle at CIF Masters, the wrestlers have to place at CIF Individuals the weekend before.

Michael Cardiel was one match away on the second day of the tournament to place in the top 10 at CIF Masters. If he would have won his match, he would have had an opportunity to wrestle at CIF State this weekend. Michael is a Jr. and is expected to be ranked in the state at the start of next season. Leighlan and Ian are both seniors who showed great leadership and toughness throughout the entire season to advance to CIF Masters.
Print