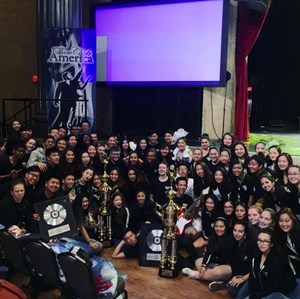 Solitaire and Marquis choirs won 1st runner up 2nd runner up in their respective divisions at FAME Nationals Orlando during Spring Break! Congratulations.

Our two competitive show choirs competed in the National FAME EVENT Show Choir America in Orlando, Florida over spring break. Both Solitaire and Marquis placed high in the opening rounds.

Solitaire won First Runner Up in the Single Gender Choir Division and Marquis placed fourth in their preliminary round (2 points away from 3rd place) which qualified them for the finals later in the evening. Marquis had 1 hour to review the judge’s comments and to work on improvements to boost their scores and placement in the finals. Marquis’ second performance improved in every category that was suggested by the judges and came in as a strong and solid third place over-all (2nd Runner-up).

Our two choirs were the representative of the State of California. Our competitors came from Virginia, Florida, Oklahoma, North Carolina, Arizona, Georgia, Washington D.C. and the host school was the Suffolk University Rampage from Boston, Massachusetts.

The  kids were magnificent and they had a wonderful experience together.

We will have a trophies on display along with our plaques. Since the competition was held at the Orlando Universal Studio Theme Parks Hard Rock Live! venue, each director received a guitar engraved with the name of the school, director and Marquis.