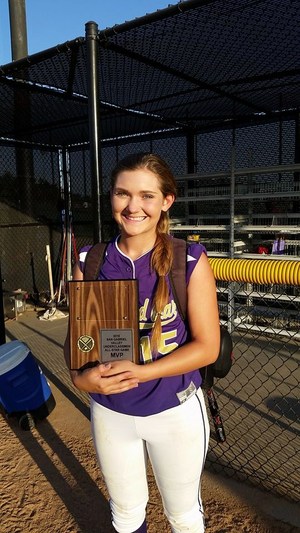 It was only fitting that Diamond Bar High School was putting on the 10th annual San Gabriel Valley softball All Star games Monday night at Citrus College.

Two former Diamond Bar top players were honored to throw out the first ball in the underclassmen and senior games to start the festivities before an overflow crowd.

The South prevailed over the North, 2-0, in the underclassmen game and the senior game ended in a 4-4 tie and was called after seven innings.

“It’s great to see the kids come back to the program as they both played in All Star games,” 15-year Diamond Bar coach Roberta Garcia-Uyemura said. “It’s a neat add-on that (Diamond Bar assistant coach) Garrett (Fisch) brought to the game. It’s good to try to bring back the kids playing in college so the kids can see where they could be.”

Adding to the drama was Diamond Bar sophomore Izzy Wilson, Danielle’s sister, earning underclassmen MVP. She had a two-run double for the only two runs of the game.

In the senior game, which ended in a tie for the first time since 2008, Charter Oak senior Brielle Fraijo was named the MVP also for a two-run hit that gave the North team an early 2-0 lead.

“I didn’t expect this (MVP) and didn’t expect to be even on the all stars either,” said Fraijo, who was on the varsity for three years. “It’s an amazing feeling.

“Coach asked where I hit in the lineup at Charter Oak and I said eighth or ninth, but he told me to lead off. That kind of got me a little nervous but I relaxed and got in a zone and got the hit.”

Prior to the senior game, La Rosa felt honored to throw out the first pitch, which was high and outside.

“I haven’t touched a softball for six years,” said La Rosa, who brought her 18-month-old daughter Charlie out to the circle. “It was a lot of fun and really nice to be asked. “I thought how it was going to turn out but it was a lot of fun.”