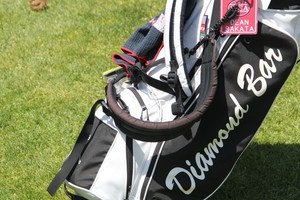 The past week was great for our Girls Golf Team! By the end, they won their 11th straight league championship!!!

--- Monday, Oct 3, they won the Ayala tournament and went 1st and 2nd in the individuals.

--- Tuesday, Oct 4, they went on the road in league play to face Claremont who is playing the best they have played in school history. The Brahmas won 193-209 to raise their record in league to 11-0 as Claremont falls to 9-2.

--- Wednesday, Oct 5, the Brahmas took second in the Knabe Cup and Crystal Wang shot a school record seven under par to win the Individual Championship of the Knabe Cup.

--- Thursday, Oct 6, Claremont came to Diamond Bar Golf Course and the Brahmas closed out the outright league title with a convincing 193-217 win.

Monday, Oct 10, the Brahmas play Walnut, the number 1 team in the state.