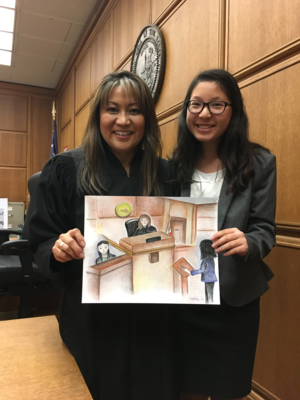 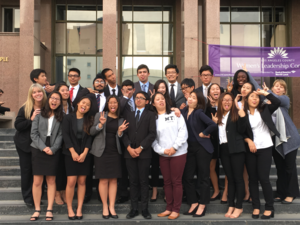 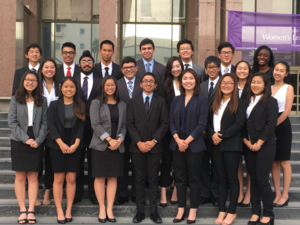 Monday, November 7, the season ended for our Mock Trial Team. The team will likely be competing in a spring competition at Duke University.

The 20 students were, as always, exemplary role models of talent, hard work, and good sportsmanship.

Some notable accomplishments: senior Nicole Kim, a defense attorney on the team, was named MVP in one round of competition and Isabelle Kwok, the "victim" in this year's case was named MVP in another round.

The judge and the attorney scorers felt that our bailiff, junior Rishil Pansuria should have been MVP. They were so impressed with his courtroom presence.

Two students received perfect scores from the attorneys scoring us; junior Janice Lee who was playing the defendant and of course our bailiff, Rishil Pansuria.

Sophomore Patrick Ma was amazing as a defense attorney this year, as both a new member and a relatively young one (he is still 14), his closing argument was particularly noteworthy.

The two pretrial attorneys were both exemplary: junior Jeremy Barajas and senior Manshaan Dhir. The role pf pretrial attorney is the position on the team where the student attorney argues the constitutionality of a particular issue directly with the judge, this year it was the admissibility of information gathered as a result of an illegal police stop.

For this year's Mock Trial competition we were again fortunate to have a very talented DBHS student serve as our courtroom artist. Here is junior Megan Shen submitting the art she drew during the two hour trial in the LA County courthouse. The judge was so impressed, we feared that the judge was going to keep it for herself.

The judge is the one that requested that we take this photo.