"Journey to the West" Receives Top Scores From Judges 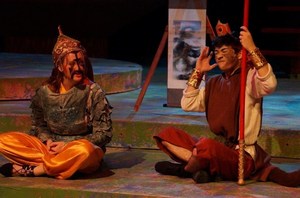 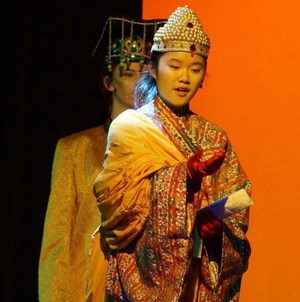 Adjudication scores are in and "Journey to the West" received top scores from all the judges in Acting, Directing, and Technical Merit.
Great news has come to our Theatre Arts Department. Each fall CETA (California Educational Theatre Association) sends theatre professionals out to judge fall plays produced by High School across the state of California. Judges adjudicate Acting, Directing, and Technical production elements.
We will know in the next couple of weeks whether the production’s high scores will result in an invitation to perform at the CETA Play Festival in January. At this statewide festival one school from each of 5 regions is chosen to present their play at the festival and two others are given the honor of presenting selected scenes. Our high scores should place us in the running to be asked to perform at festival. Keep your fingers crossed!
The judges chose the following production members to receive awards for artistic or technical achievement which will be presented at the CETA Festival in January.
Wilfredo Nazareno— Music Director/Composer (2016 Grad)
Jana Yamak— Stage Manager
Julianna King, Miranda Tejada— Costume Coordinators
Nick Azurin— Sun Wukong (Monkey King)
Matthew Lee— Tripitaka Tang
Daniel Durkee— Bajie
Amelia Anijielo— Sha Monk
Nina Wang— Buddha/Subodhi
Julianna King— Jade Emperor
Pilar Alcazar— Guanyin
Ellie Desmond— Dragon King/Girl/Robber
Amanda Revilla—Death Girl/Robber/Eight & Ten
Mary Thomas— Tang Emperor/Apricot
Miranda Tejeda— Green Orchid/Daoist Disciple
Chloe Reyes— Monkey, Fiend, Peach Girl, Robber
Gisel Munoz— Light Board Operator
Elizabeth Gomez— Sound Board Operator
Luke Teerling— Yama/King
Sabrina Wu— Daoist Disciple, Peach Girl
Julianna King, Arvind Singh, Miranda Tejeda, Mary Thomas, Daniel Durkee, Luke Teerling— Headdress Design & Construction
The judges were “wowed”. Here are a some of their comments:
“This crew worked hard to present a memorable night of theatre for the novice and
seasoned theatre fans and I cannot imagine a better version could have been prepared anywhere but from this team.”
“This was a stellar production that I would have loved to see again! The performances and intricate storyline were beautifully expressed, the characters were embodied fully by all of the actors, and the design worked powerfully to provide great ambience and atmosphere for the audience to enter and the actors to play within. The impressive vision on the part of the director and design teams are to be applauded and the skills and love given by the student performers and artists were fabulous to behold. Encore!”
“This is a masterful production that shines with talent, innovation, beauty and energy. Every effort was realized and impacted the story. The students obviously received guidance, education, and appreciation while challenged to tell a story with an awareness of comedy and physicality. The performers were focused and sincere while finding the funny in moments when it was necessary. The entire production deserves accolades in every aspect.”
Print