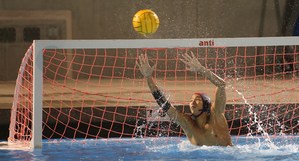 Our boys water polo season ended in the semi-final game against Roosevelt HS. The boys battled throughout a very tough and physical game. The final score Roosevelt 6, Diamond Bar 5.

Congratulations to all of our Boys Water Polo players, especially the following seniors:

Thank you for supporting the program during our season and playoff run!