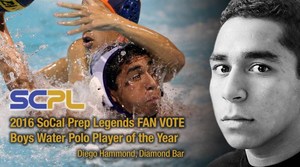 Thanks to all of the fans who voted and helped Diego Hammond win the 2016 SoCal Prep Legends FAN VOTE Boys Water Polo Player of the Year!

Hammond scored 136 goals and notched 80 assists for the Brahmas this season, which helped lead Diamond Bar to the program’s first CIF Southern Section playoff berth. After finishing fourth in the tough Palomares League, Hammond’s team received a wild-card spot in Division 6 which they turned into a spirited run to the semifinals.

The playoff run included wins over Estancia, a shocking victory over third-seeded Garden Grove, then Arcadia.