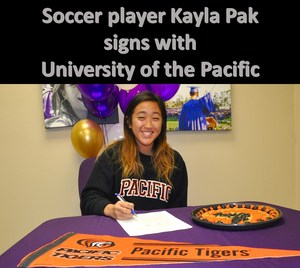 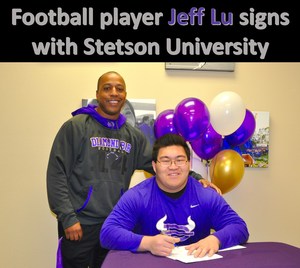 National Signing Day is the day when top high school athletes confirm which colleges they will attend. At Diamond Bar High, seniors Kayla Pak and Jeffrey Lu made their commitments official on February 1.

Soccer star Pak, who plays up and down the field as an outside back, will attend University of the Pacific. After the morning signing, the official papers were faxed to the Northern California college. “I’m really excited knowing that I’m going there to play soccer!” the 17-year-old said.

Pak began her career on a local AYSO team nearly a decade ago. And although she also dabbled in high school track and volleyball for a short period, it was soccer that ultimately won her heart. “Playing sports is exciting! And being in this environment, on my school and club teams, encourages me to be better. They push me a lot,” she added. Pak said when she visited the campus, it was “really nice and felt homey.” She plans to enter the school’s accelerated pharmacy program.

Offensive lineman Lu will don a Hatters football jersey at Stetson University in Florida next year. The 17-year-old had interest from other colleges, but the offer from the Division I school sealed the deal. Now standing 6’2”, 300 lbs., Lu said football teams had been trying to recruit him since elementary school, but he stayed focused on academics and band.

He began playing in the Brahma program as a freshman and was a varsity starter the past three years. “Jeff had a great career here and is an excellent student,” said coach Marcus Hughes. “His work ethic and drive will make him very successful in the near future.” He was named to the All-Palomares League First Team this year and played in two All-Star games.

This week, Lu was also among 500 high-achieving students in California named 2017 Presidential Scholar candidates. He plans to major in biology, go to medical school, and pursue a career as a neurosurgeon. “It’s not really common among football players!” he said.