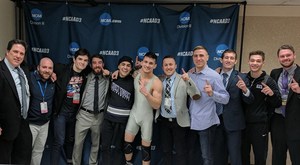 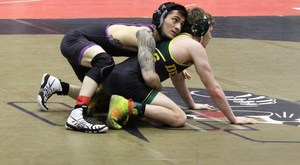 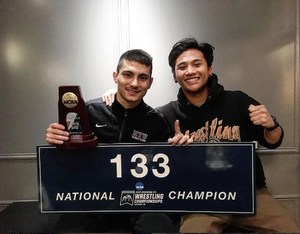 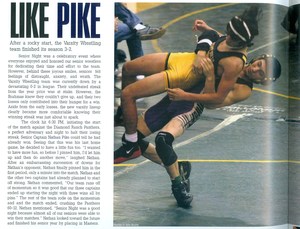 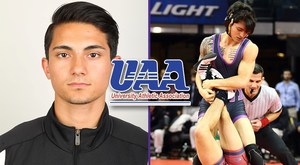 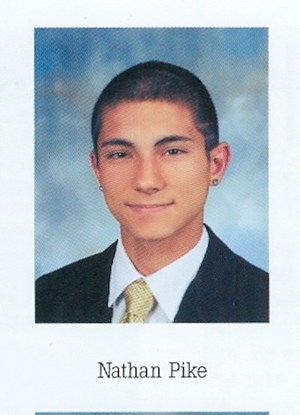 Nathan Pike (DBHS Class of 2012) finished his collegiate wrestling career at NYU in style on Saturday night, March 11, pinning his way to the 133-pound national championship at the 2017 NCAA Division III National Championship, hosted by the University of La Crosse-Wisconsin, at the La Crosse Center in La Crosse, WI.

While a student at Diamond Bar High School, he was a three-year team member, started all three seasons, captain as a senior, went 48-6 with 35 pins as a senior, earning team MVP honor and was Southern Section Masters Runner-up in 2012.

This college season, Pike, the second seed at 133 pounds, pinned his opponent, fifth-seeded Jay Albis of Johnson & Wales University, with 12 seconds remaining in the second period (4:48). The West Covina, CA, native is the first national champion in NYU wrestling history.

"To do this as a senior is really special," explained Pike. "It really validated coming back for this last semester. I owe a lot to my teammates, coaches and the support we've got from everyone at NYU and within the athletic department. It's a lot easier to step out there when you have a ton of people in your corner."

The second period was all Pike, however. The 2016 national runner-up recorded a quick takedown and earned two back points before pinning Albis to win the title.

"In the second period, I was able to try a few different moves and they worked out," added Pike. "Once I was on top I did what I do best and was able to get him on his back."

Pike ends his career as the second three-time All-American in program history and the first two-time finalist.

NYU finished the event with 30.5 points (second most in program history) and in 15th place of the 68 represented teams.

"That was my last wrestling match ever," concluded Pike. "I'm feeling so many emotions, but this is awesome...best I've felt in a long time!"