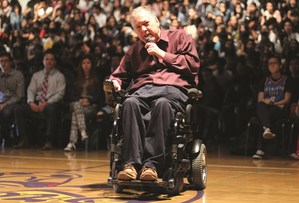 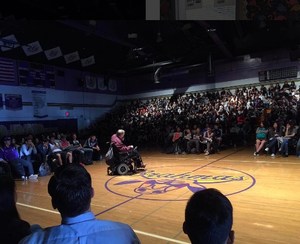 Wednesday, April 5, students took an hour-long break from their classes to hear award-winning speaker Jeff Eben, who came to Diamond Bar High School to give a motivational speech.

Eben travels around the world to speak about how he overcame his physical disability to become an educator for 30 years. Throughout his career, Eben has had experience in teaching, administration and coaching and spent 15 years as the principal of Case High School in Wisconsin.

Eben was also the founding principal of National Blue Ribbon school Clovis East High School. His work in education has earned him several accolades; Eben was Fresno County’s Administrator of the Year in 1998 and has a spot in a community Hall of Fame for Lifetime Achievement in Education. Eben earned Phi Delta Kappa’s Distinguished Educator Award for his positive contributions to the culture of Case High School.

He was invited to speak at DBHS after staff members of Walnut Valley Unified School District attended his speech at a staff development meeting last year. According to Instructinal Dean Matt Brummett, the DBHS administrative team believed it would be beneficial for students to hear him speak as well.

“Mr. Eben will likely be sharing his personal story about the terrible injury that he suffered at 16 years old that left him paralyzed and tasked with building his life and career in a wheelchair,” Brummett said via email. “His message will likely focus on identifying ‘wins’ every day of our life, no matter how difficult the circumstances.”

His injury put an end to his teenage aspiration to play college football. He has spoken in various educational settings worldwide, including at Oxford University.

“We believe the message that he will share will have a profound impact on our students,” Brummett said.