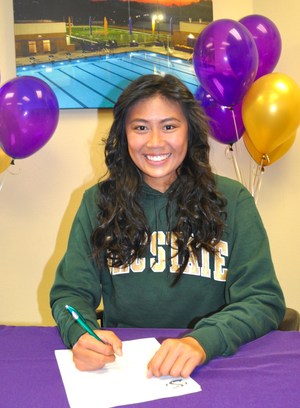 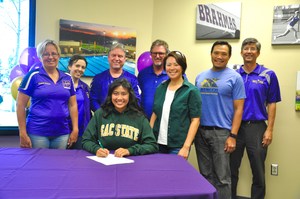 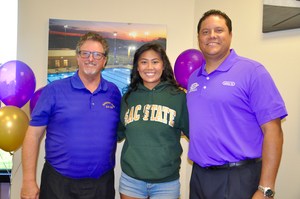 The one catch – the varsity swimmer had never rowed a day in her life.

“I thought, it wouldn’t hurt to try,” the optimistic 18-year-old said.

Several months later, she received an “out of the blue” call from the coach at Sacramento State University.

“I thought, why is the rowing coach calling me? But, they did and it was super exciting!” the athlete offered.

Niko learned her decade of competitive swim experience, plus four years as a triathlete proved to be a viable background for the sport.

“As long as you have endurance and power,” she explained.

In January, Niko stepped into a boat for the first time during a clinic the college offered for novices interested in being on the team.

“It was the hardest thing!” she said about learning the concepts of feathering, power, and drive on Lake Natoma.

“People think it’s all arms, it’s not. It’s also back, legs, and gluteus maximus – it’s everything.”

An official visit to the Division I school during spring break sealed the deal.

“I loved it the minute I stepped foot on campus. And I love the team. There are so many personalities – just like a family,” she added.

On Friday, Niko made her commitment official during a signing ceremony with school officials and family members.

“I’m so happy that Gabby will be competing at the collegiate level,” said swim coach Darlys Ankeny.

“I feel very lucky to have this scholarship!” Niko said after the signing.

“It’s might seem like it’s just another piece of paper, but in reality, I’m changing my life’s course.”