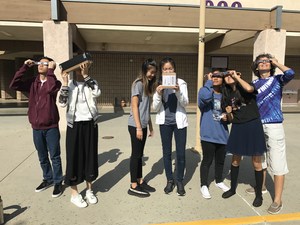 BULL'S EYE NEWS STORY:
By Emily Kim, Feature Editor
On Monday, one of the most anticipated celestial events passed over a majority of the continental United States bringing awe to all onlookers as the sky turned dark in the middle of the day.
Diamond Bar High School math teacher Dena Lordi organized an eclipse viewing for students, inviting several other teachers to join in during third period when the event would be most visible.
“I couldn’t imagine something that amazing happening outside and sitting in here teaching my kids and not being able to share it with them,” Lordi said. “I wanted to share it with my students and I got so excited about it that I wanted to share it with the whole school.”
She credited physics teacher Angela Jensvold in helping her organize the day and providing additional eclipse-viewing equipment.
“She was my ‘advisor,’” Lordi said. “ I wrote up all the emails and sent out all the information to the students, and I had her read it before I sent it out. We talked about where we would each be. She was in the back of the campus [and] I was up in the front.”
Lordi had her students turn in their homemade eclipse viewers on Friday and taught them how to use the boxes and glasses to avoid eye damage. Her class also watched videos on the mathematics involved with the eclipse, and she explained how she would later connect it to trigonometry for her freshman class.
Several other classes and administrators were outside on the upper quad. Science teacher Malinalli Cooke, history teacher Ty Watkins and the Pathways students were among those participating during third period.
“When I was little, I learned about eclipses, and I have always really wanted to see one. I have been waiting 13 years to watch one, so when I saw it I was really emotional because I felt like it was a chapter of my life,” senior Megan Li said.
https://dbbullseye.com/2017/12716/ Source: The Bull's Eye
Print