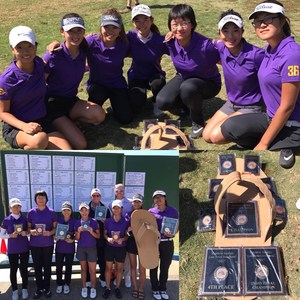 Girls golf has had a fantastic, fun two-week run.

Senior Crystal Wang has been on a tear.

Coach McCabe gave her some advice on hole 17, she was 6 under going into the last hole.

Crystal was medalist in the three of our league matches including a two under par 34 for 9 holes at tough Glendora CC.

Crystal was 4 under after 8 holes at Glendora CC and then Coach McCabe talked to her on hole # 8.

The Brahmas took second place behind Troy at the South Bay Classic out of twenty teams..

The Brahmas are 5-0 in Palomares League play and are in good shape for the second half.

Esther took 4th place as an individual at The Rainbow Sandal Classic to help lead the Brahmas to the title.

Kailie Vongsaga, Jasmine Zhang and Susie Pan give us a lot of depth for the final run through October.

Thanks to all the teachers who have gone out of their way to help the girls survive the 8 matches in 12 days, getting up at 4:00 am, and getting home late most nights.

Coaches Jason Tuck, Phil Duarte and Roberta Garcia have been very helpful as well and now it starts to get tough.