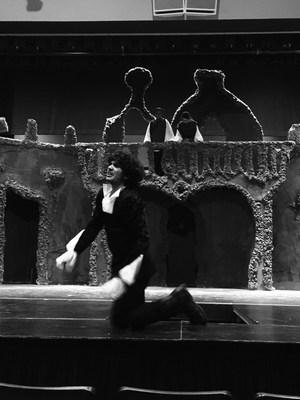 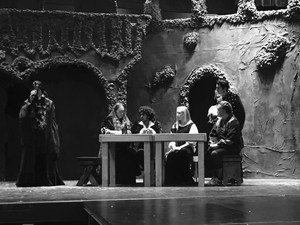 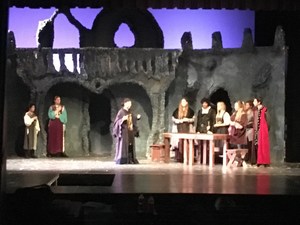 Hamlet, Shakespeare’s greatest masterpiece, is the story of a young man whose life is irreversibly altered when his father, the king, dies suddenly and then comes back as a ghost to tell Hamlet that he was murdered by Hamlet’s uncle, Claudius. Hamlet’s father charges Hamlet with revenging his murder. Hamlet, who is a philosophy student, dives into a deep depression and finds himself missing several opportunities to act on his father’s request. Hamlet’s hesitation results in several missteps and the accidental killing of his girlfriend, Ophelia’s, father. Distraught over Hamlet’s rejection and her father’s death, Ophelia drowns herself. Claudius begins to suspect that Hamlet is mad and plotting against him and plots to have Hamlet killed. Laertes, Ophelia’s sister, returns from France and vows to avenge her father and sister’s deaths. The play reaches its climax in the famous last scene where all the conspiracies come to a head and most of the main characters end up dying on stage. DBHS’s ambitious production features live original music composed and conducted by Diamond Bar High School alumnus, Wilfredo Nazareno. The play within the play is presented as an opera. To provide performance opportunities for more students, DBHS Theatre Director, Beatrice Casagran, cast two different casts. Cast 1 features Senior, Pilar Alcazar, as Hamlet and Cast 2 features Junior, Arvind Singh, in the title role. The casts made up mostly of Freshman and Sophomore students have been working diligently to master the material including research into Elizabethan theatrical traditions and Shakespeare’s language. “The key is to make sure that each actor clearly understands the meaning and connotation of every line he or she is saying onstage,” explained Casagran. “We have spent a great deal of time discussing language and subtext. There is a lot of humor in Hamlet, and we’ve striven to find those funny moments so that the tragic moments are then more poignant.”

DBHS has become known for its high caliber theatre productions put on entirely by student actors, managers, and technicians. Last year’s fall play, Journey to the West, was chosen by the California Educational Theatre Association as the top high school play in its region.

To purchase tickets online visit seatyourself.biz/dbhsdrama. Tickets will also be on sale from 12:15- 12:55 daily in front of the DBHS theater building. For more information, contact Beatrice Casagran at bcasagran@wvusd.k12.ca.us.