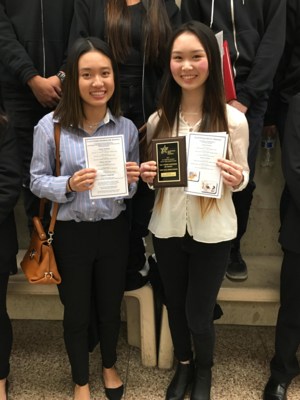 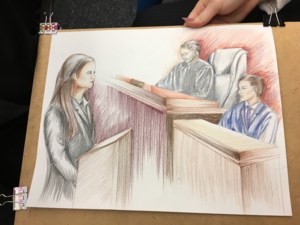 Monday, December 4,  the award ceremony was held for this year's Mock Trial competition at the LA County Courthouse. Although our team lost in the top 24 round, we went to watch the final round and to watch two of our team members receive awards. Hailey Shi was our courtroom artist. She had the task of creating a drawing of a scene from a round of competition during the two hours of the competition. Her work was given third place.
Also, Iris Miao was our courtroom reporter. Iris had to sit in the jury box and take notes on the proceedings just like a journalist would then submit a newspaper worthy article based on what she saw. Iris was also given third place. Unfortunately, the award ceremony was so long, only Hailey got to publicly receive her award, Iris's was given out last in the program and our bus had to be back at school by 10:00 pm so she will have to be mailed hers.
Print