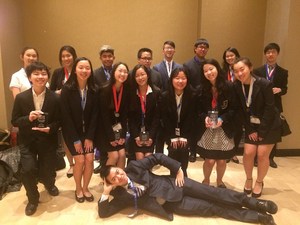 Gathering with members from all over Southern California, Diamond Bar High School’s Distributive Education Clubs of America’s competed for its third year at the Career Development Conference. The event was held in the Anaheim Wyndham Hotel from Jan. 12 to 14.

DECA students competed in one of five categories: hospitality, marketing, finance, business administration and entrepreneurship, which was a new event offered this year.

“I felt the competition was pretty fun,” senior president Melody Chang said. “We actually had a lot of bonding with the members.”

The conference lasted for three days and two nights. For the first day, students were given 90 minutes to answer a 100-question multiple choice test, followed by an opening orientation. During the ceremony, the theme of being “limitless” was introduced, highlighting the idea that a student’s potential has no bounds. After the orientation, there was a brief talent show featuring acts from different schools; Cheung represented DBHS with a freestyle dance.

“Every time members do a role play, they learn from their event and apply it to next year,” Chang said.

On the final day, there was an award session that was broken into two parts. In the first session, mini-awards were given to the top three best performing students for each written exam and roleplays. During the grand award session, students were awarded for the overall score, with two thirds of the score based on role play while the other one third was based on the test.

Seven Brahmas placed at the event led by their President, Melody Chang.