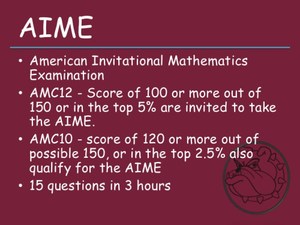 136 Brahmas chose to take the national AMC math exam on February 7, 2018. Of those taking the exam, the following 6 Brahmas scored high enough to advance to the AIME exam in March. Congratulations!

Qinhong, Matthew and Timothy all scored in the top 1% of the nation!

The AIME is the second of two tests used to determine qualification for the United States of America Mathematical Olympiad (USAMO), the first being the AMC.

The use of calculators is not allowed on the test.