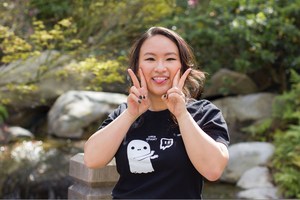 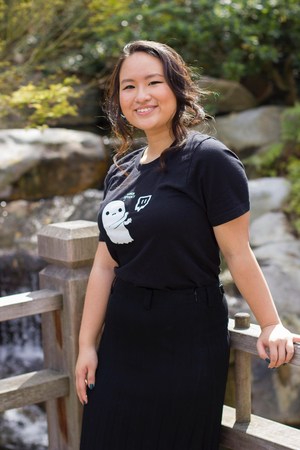 Designing original artwork, ranging from the bold, vivid colors of anime characters to the delicacy of lavender flowers, Diamond Bar High School junior Katrina Lee has created a website showcasing her artwork along with entering competitions.

Her online portfolio, www.katrinamber.wixsite.com/home features her vectors–art created using illustration software programs–along with logos, banners and flyers for clubs, photographs of nature and original works based on Japanese style.

“It was just last year that I picked up graphic design,” Lee said. “I was fascinated by combining my artwork to make it a bigger project.”

According to Lee, the website provides those who might offer her internships and job opportunities a reference to her work, which demonstrates her art capabilities.

“I want to the people to be able to recognize my work,” Lee said. “Every time I look at the website, it is very satisfying to see how much I have grown as an artist, from the very beginning to now what I have become.”

Lee first became interested in art in the seventh grade when she began drawing in the style of anime. During her free time, she would sketch her favorite characters, which improved her artistic abilities. Fascinated by Japanese artwork, she turned her hobby into a more serious passion.

Currently, Lee is taking the computer graphics class offered at DBHS, where she has learned to use illustrator and other software programs. In addition, Lee has entered competitions and participated in projects suggested by computer teacher Alina Gallardo, providing her multiple opportunities to expand her artistic ability.

“Katrina is definitely a very talented and creative student I have in my class,” Gallardo said.

Her first competition was the Greeting Card Competition sponsored by The Gallery collection. According to Lee, her design was inspired by the movie “Tangled” and incorporated intricate blue and white swirls into a Christmas tree. Though she did not win the competition, she was shocked to have even been named a finalist.

“When I saw the results, I was like, ‘What? This can’t be true.’ I was really surprised because I did not expect to place,” Lee said.

Lee also competed in the Doodle for Google competition, for which she has not received the results for yet. For this contest, she combined the theme of nature with origami to show her longtime interest in Japanese culture.

In addition to entering graphic design competitions, Lee dedicates most of her time to the eSports club at DBHS as historian. She has created multiple flyers and banners to promote the club.

“This club has inspired me to try harder when designing flyers because my first flyer was definitely not great,” Lee said. “I would say that this acted like motivation to make myself a better graphic designer.”

After exploring the field of graphic design, Lee said she plans to pursue it in college.

“I actually want to major in graphic design and minor in architectural design at UCLA. I just want to do the thing that I love doing in college too,” Lee said.