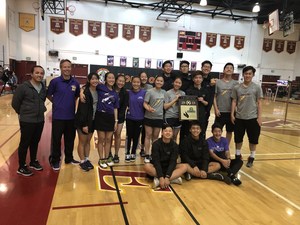 Saturday, May 12, our Brahma Badminton team won its 7th consecutive CIF Championship. They defeated the Arcadia Apaches. Way to work together to build a culture of excellence!

The mighty Brahma Badminton Team rolled into Arcadia and dominated in the CIF Championship by a score of 15-6, finishing the season undefeated!

This is the seventh consecutive CIF Championship for the Brahmas. Their final record was 15-0.

Mirabelle Huang was dominant, cruising to a 4-0 record in the match. In her last point, she fought through a sprained ankle to finish her unblemished record on the day.

Captain Jasmine Huang was a very strong 3-0 on the day, winning easily in her Women’s Doubles matches and pairing with Brandon Zhou (3-0) in a hard fought Mixed Doubles match. Zhou paired with Daniel Huang to beat the top seeded doubles teams.

Vanessa Do and Megan Lee crushed their Women’s Doubles competition to finish 2-0 on the day.

Ambrose So and Claire Wang won two important points in the victory.

The Brahmas will send 20 players to the CIF Individual Tournament which begins Tuesday, May 15th.