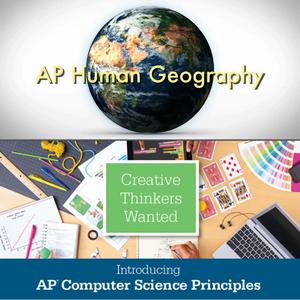 BRAHMAS INTRODUCED TO NEW AP COURSES
Human Geography, Computer Science classes added to curriculum.
Story By Angela Yang, Bull's Eye News Editor
Catering to both the tastes of humanities and STEM-inclined Brahmas, AP Human Geography and AP Computer Science Principles are two new additions to the Diamond Bar High School curriculum this year.
Five years after longtime U.S. history teacher Ty Watkins began advocating for the addition of APHG to the school’s curriculum, he is finally teaching the subject as a first period-exclusive class.
“Today, it’s so important to know about the Earth and know about migration and immigration,” Watkins said. “It’s such a hot topic that we don’t really teach it in our curriculums in any other class.”
During its 18 years of existence, APHG has typically been offered by schools as a course for freshmen. Some schools, including DBHS, offer it as another AP elective, so freshmen cannot take the class.
“Originally what [the school] wanted to do was get it as an elective to start, and maybe in the next couple years [make it into] a course that will be offered as an AP class for freshmen,” Watkins said.
The class focuses on human migration and current affairs. According to Watkins, students often rely on online resources for information. A typical period might include a short documentary on culture or migration and a case study on a specific country, followed by open discussion.
“Definitely I’ve learned to see the perspectives of asylum-seekers and those trying to make a new life in a new country,” senior Soraab Rupal said. “I’m the son of an immigrant so I already had some sort of knowledge about that, but these people have to completely start over everything—most of them leave all of their family behind.”
Junior Sabrina Peng, who is also in Watkins’ AP U.S. History class, said the most prominent difference between APHG and a history course is the former’s focus on the present rather than the past.
“We talk about our own views on issues such as population growth or racism, or we even talked about the birthright [citizenship] that is currently being discussed about with Donald Trump,” Peng said.
Meanwhile, APCSP keeps students up to date on the workings of the internet, data analysis and cyber security. Taught by computer science teacher Victor Lu, the course goes further in depth than AP Computer Science A by studying the principles behind the act of programming.
“Some students think that computer science is only coding. While coding is a huge part of computer science, it’s not the only thing,” Lu said. “I want to let students know that there’s a lot more than just programming, and that’s CSP.”
After learning a few basic concepts during class, students implement them on the computer in accordance with a specific prompt. They contextualize what they learn by looking at real-life situations as models of what they do on their computers.
“So far we have covered algorithms, boolean, functions… and creating applications,” junior Nathalie Fang said. “I [feel] like understanding how technology works is very important, especially since future jobs and even current jobs require some knowledge of computers.”
According to Lu, APCSP is more activity-driven compared to APCSA. He maintains a hands-on course of study in which students must cooperate and share ideas.
“It’s driven by the computer but I lead them in with an idea of where to start thinking, and then the directions are multitudes,” Lu said. “We try to [have] the mindset that we’re not just in our little programming bubble.”
https://dbbullseye.com/2018/brahmas-introduced-to-new-ap-courses/ Source: The Bull's Eye
Print