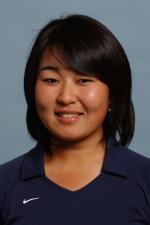 DAVIS, Calif. - UC Davis standout Alice Kim, who capped her impressive season with an eighth-place finish at this week's NCAA Division I Championship, has been named an All-America honorable mention by the National Golf Coaches Association, it was announced.

In addition to her All-America honor, Kim was named to the All-West Region team as the UC Davis sophomore established her name among collegiate golf's elite players . The awards announcements were made late Friday evening during the awards banquet following the championship at Caves Valley Golf Club in Owings Mills, Md.

Kim, from Diamond Bar, Calif., enjoyed a tremendous season for the Aggies in 2008-09. She led the team with a 73.4 scoring average and had seven top-10 tournament finishes including three in a row during a magnificent postseason run that culminated with putting herself into contention for the Div. I Championship.

The All-Big West Conference first-team selection was sixth at the league championships at San Luis Obispo in April before following with an eighth-place performance at the NCAA West Regional, a showing that qualified her for the NCAA Finals.

At Caves Valley Golf Club this week, Kim flirted with the lead, getting as high as second on Friday before posting a 7-over total of 295 and placing in the top 10 of the 126-player field. She entered the tournament ranked 50th by Golfstat.

She tied for second at the Heather Farr Memorial Invitational at Colorado last September and was third at the Fresno State Lexus Classic in February for her other top showings.

Kim's honor is the first All-America team nod for the UC Davis women's golf program which just completed only its fourth year of varsity status. The Aggies have already made a name for themselves on the national level by finishing 21st nationally last year in just their first season of eligibility and then advancing Kim to the prestigious tournament this year.