What is Sudden Cardiac Arrest (SCA)?

Sudden Cardiac Arrest (SCA) is a condition in which the heart stops beating, suddenly and unexpectedly, due to a malfunction in the heart’s electrical system. When this occurs, the heart cannot contract properly to maintain adequate blood flow to the brain and throughout the body. SCA is not a heart attack. The underlying cause of SCA is typically due to a congenital or genetic structural abnormality of the heart, or an abnormal heart rhythm. In 2% of athletes who suffer from SCA, a postmortem examination fails to identify an abnormality. SCA is the leading cause of death in exercising young athletes, with an occurrence in high school athletes of 1:100000 to 1:200000, which may be grossly underestimated. However, with proper prevention, recognition, and management it is highly possible to avoid incidents of SCA.

1.      On an annual basis, each athlete and their parent/guardian will be given, in writing, the CIF Sudden Cardiac Arrest Information Sheet (“Keep Their Heart in the Game”) to review,  understand, and sign and return. This will accompany the Sports Physical Packet.

2.      On an annual basis, the pre-participation physical examination will include the completion of a standardized history form and attention to episodes of exertional syncope or presyncope, chest pain, a personal or family history of SCA or a family history of sudden death, and exercise intolerance.

Coaches and other Athletic Department Personnel

While not mandatory, it is highly advised that all coaches and other athletic department personnel complete the free NFHS course on Sudden Cardiac Arrest. With content developed by Simon’s Fund, this course will help you learn and recognize the warning signs and symptoms of Sudden Cardiac Arrest. Also included are tips for what to do in the critical moments after an individual suddenly collapses in order to save their life. The course can be found at https://nfhslearn.com/courses/61032. Per CIF Bylaw 22.9.F all coaches shall hold certification in adult and child CPR, and basic first-aid, which include training in the signs and symptoms of Sudden Cardiac Arrest.

Potential Indicators That SCA May Occur

·         Fainting or seizure, especially during or right after exercise

·         Fainting repeatedly or with excitement or startle

·         Excessive shortness of breath during exercise

·         Excessive, unexpected fatigue during or after exercise

Factors That Increase the Risk of SCA

·         Family members with unexplained fainting, seizures, drowning or near drowning or car accidents

·         Use of drugs, such as cocaine, inhalants, “recreational” drugs, excessive energy drinks or performance-enhancing supplements

Per CIF Bylaw 503J: A student-athlete who passes out or faints while participating in, or immediately following, an athletic activity or who is known to have passed out or fainted while participating in or immediately following an athletic activity, must be removed immediately from participating in a practice or game for the remainder of the day. A student athlete who has been removed from play after displaying signs and symptoms associated with sudden cardiac arrest may not return to play until the athlete is evaluated by a licensed health care provider and receives written clearance to return to play from that health care provider.

Preparation is the key to survival once SCA has occurred. Established EAPs specific to each athletic venue, including an effective communication system, training of likely first responders in CPR and AED use, acquisition of the necessary emergency equipment, a coordinated and practiced response plan, and access to early response will be in place.

In any athlete who has collapsed and is unresponsive, SCA should be suspected. If normal breathing and pulse are absent, CPR should be started immediately and EMS activated. The CPR should be performed in the order of CAB (chest compressions, airway, breathing) by medical professionals (hands-only CPR is now recommended for lay responders) while waiting for arrival of the AED and stopped only for rhythm analysis and defibrillation. This should continue until either advanced life support providers take over or the victim starts to move. 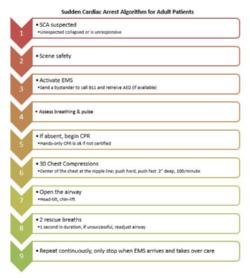