Alissa's research interests lie in the field of higher-dimensional algebra and some of her recent work, funded by an NSA Young Investigator Grant, involves categorifying algebraic structures called quandles with the goal of defining new knot and knotted surface invariants. She is also interested in the connections between mathematics and music, and enjoys playing the clarinet with the Santa Monica College wind ensemble.

Alissa has extensive experience mentoring and supporting women mathematicians through her involvement in the Summer Mathematics Program (SMP) at Carleton College and teaching in the Enhancing Diversity in Graduate Education (EDGE) program and the Summer Program for Women in Mathematics (SPWM) at George Washington University. She is also a co-organizer the Southern California Women in Mathematics Symposium, the Graduate Education Mentoring (GEM) Workshop, and the Career Mentoring Workshop (CaMeW), and is currently serving as a Member-at-Large on the Executive Committee of the Association for Women in Mathematics. Alissa is also extremely active in helping students increase their appreciation and enthusiasm for mathematics through co-organizing the Pacific Coast Undergraduate Mathematics Conference, funded by the NSF, NSA, and MAA, now in its ninth year.

Alissa is a recipient of the Mathematical Association of America's 2011 Merten M. Hasse Prize for expository writing and 2011 Henry L. Alder Award for distinguished teaching by a beginning college/university mathematics faculty member. In addition, Alissa was an invited speaker at the Museum of Mathematics, the MAA Sectional Meetings of the So Cal/Nevada, EPaDel, and DC-MD-VA Sections, and the keynote speaker at the University of Oklahoma Math Day, the UCSD Undergraduate Math Day, the Expanding Your Horizons Conference at James Madison University, and the Sonya Kovalevskey Mathematics Day at Cal State University, Fresno.

Dr. Alissa S. Crans has been recognized nationally for her enthusiastic ability to share and communicate mathematics, having been honored with the Hasse Prize for expository writing on mathematics, as well as with the 2011 Henry L. Alder Award for distinguished teaching by a beginning college or university mathematics faculty member. A presenter at the first National Math Festival in 2015, Crans has also been invited to speak at MoMath and in various lecture series including the MAA Distinguished Lecture and George Kitchen Memorial Lecture, as well as at numerous mathematical days for undergraduates. She is known for her active mentoring and support of women and underrepresented students and is dedicated to helping all students increase their appreciation and enthusiasm for the discipline. She proselytizes about math in settings that range from the public library to “Nerd Night” to public school classrooms. She is Professor of Mathematics at Loyola Marymount University, where her research interests lie in the field of higher-dimensional algebra and are currently supported by a Simons Foundation Collaboration Grant. 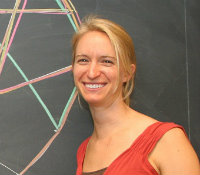