Ryan Robert Wendell[ (born March 4, 1986) is an American football offensive guard for the New England Patriots of the National Football League (NFL). He was signed by the Patriots as an undrafted free agent in 2008. He played college football at Fresno State.

Wendell was born in Diamond Bar, California. He attended Diamond Bar High School where he played football as both an offensive and defensive lineman. He had his jersey number retired and is a member of the school's hall of fame.

After graduating from high school, Wendell attended Fresno State University, where he started in 9 games as a true Freshman in 2004 and earned WAC Co-Freshman of the Year. He started all 13 games of his Sophomore season and all 12 games of his Junior season (the first 8 at Guard and the last 4 at Center), earning All-WAC honors. As a Senior he started at Center.

Wendell played in 15 games for the Patriots in 2010. He started the final two games of the season in place of an injured Dan Connolly.

During training camp before the 2012 season, Wendell was part of a competition for the starting center job in New England. He beat out longtime Patriot Dan Koppen for the job.[3] In 2012, counting special teams, he played a total of 1,379 snaps, the most of any NFL player. As a result, he earned a bonus of $179,907 from the Patriots in March 2013 as a result of the NFL's "performance-based pay" system, which rewards players with high playing time and low salaries (his 2012 base salary was $750,000).

On March 28, 2014, Wendell signed a two year deal worth up to $3.25 million. During the week five 2014 Sunday Night Football game against the Bengals, Wendell was moved to guard where he enjoyed immediate success on a Patriots team experimenting with their offensive line. The offensive line only allowed one sack the entire game. Wendell started the rest of the year at right guard, and was a part of the offensive line that won Super Bowl XLIX 28-24 over the Seattle Seahawks.

Prior to the 2015 season, Wendell was voted a captain by his teammates for the first time in his career. 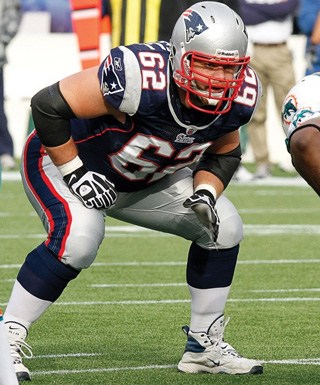