Diamond Bar High School is the 2015-2016 National Math Madness, Division 2E Champions.
Math Madness is an exciting live competition that occurs in the fall.  Ask your math teachers about how you can be involved in Math Madness!
Want to watch a match?  Click on the link below to see our real time score as the Brahmas battle each week.
Here is the link to watch our matches.
https://www.aretelabs.com/math_madness/44/watch_match/265

Despite losing, we actually moved UP from #20 to #17 in the Nation.

Coaches know how rare that is!  So, obviously we didn’t have a bad day.  They were just better.

As always our team score is comprised of our top 5 scores.

Junior Tony Wan was perfect once again with an 8 out of 8.  He was our only perfect score.  Tony is now ranked #49 in the Nation.

Freshman Jason Kim, Sophomore Aaron Sun, Junior Warrick He and Seniors Keshav Sriram and Nathan Song all contributed with 7 out of 8.

To give you an idea of the “depth” of the team, if the scoring was based on the top 10 students, we would be ranked #13 in the nation!

To give you an idea of the “depth” of the team, if the scoring was based on the top 15 students, we would be ranked #09 in the nation!

To give you an idea of the “depth” of the team, if the scoring was based on the top 20 students, we would be ranked #05 in the nation!

Honestly, the fact that we can even compete against a private school like Harker is pretty humbling.

Being able to give admission exams, charging $52,000/year in tuition, having an 11 to 1 teacher to student ratio, having a feeder system in place, etc. has to give them a slight advantage.

Hats off to them, though, they did a great job.  We gave it our best and they still outperformed us.  It’s nice to know that the gap is getting smaller …. we are getting closer.

Many thanks to you all for your support and for promoting this event with your students.  Having 40-50 students come after school to do killer math problems for fun is AWESOME.

Believe me, the students have a GREAT time and make lasting memories.

Thanks especially to Miss Lordi and Mr. Kuo.  You two are incredible.  None of this is possible without you two.

Also to Mr. Thomas, our unofficial fourth Math Team Advisor.  You are the best and we appreciate everything that you do for us.

Thanks also to Mr. Jones and Mrs. Cabase for making this happen.

We will continue to compete in practice matches when we return from Thanksgiving break.

ALL MATCHES WILL TAKE PLACE IN THE LINC

ALL MATCHES BEGIN AT DESIGNATED TIME

PLEASE TRY TO ARRIVE 15 MINUTES PRIOR TO MATCH TIME

ROOM NUMBERS ARE FOR ALL MEETINGS DURING THE WEEK 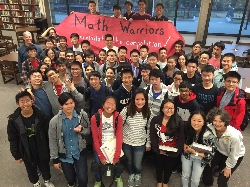